WVU To Invest $1 Million in NRAO 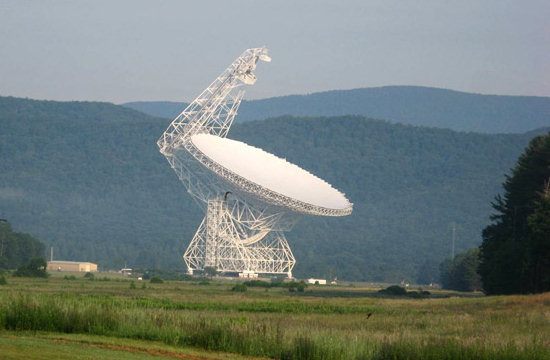 One of West Virginia’s brightest scientific stars has a brighter future.  Last month, U.S. Senator Jay Rockefeller announced that, following several months of funding uncertainty, West Virginia University has signed an agreement with the National Radio Astronomy Observatory (NRAO) to invest $1 million over the next two years to help underwrite the costs for personnel and operations associated with the Robert C. Byrd Green Bank Telescope.

The NRAO operates the Robert C. Byrd Green Bank Telescope, which is the world’s largest, fully steerable radio telescope, on behalf of the National Science Foundation (NSF).  As the funding threat loomed, Senator Rockefeller worked with Rep. Nick Rahall and U.S. Senator Joe Manchin to convene meetings of high-level officials from WVU, NSF, and the NRAO to discuss the facility’s future operations.

“I made it clear to all involved just how enormously important the Green Bank Observatory is to me personally, but more so for the people of West Virginia,” said Rockefeller, chairman of the U.S. Senate Committee on Commerce, Science and Transportation. “The observatory is vital to scientific research, exploration and discovery and its presence in our mountains creates a pride that all West Virginians hold close to their hearts. I’ve promised to fight ceaselessly to keep it open and thriving.” (Click to read Senator Rockefeller’s statement.)

Under the agreement, West Virginia University faculty and students will receive 500 additional hours of research time on the telescope. “WVU has a long-standing and thriving partnership with the Green Bank Observatory,” said Dr. Fred King, Vice President for Research at WVU.  “Our investment will provide guaranteed access for WVU astronomers to the world’s premier single dish radio telescope. We see this two-year agreement with NRAO as key to building our international leadership in radio astronomy and increasing the profile of WVU as a center for research in astronomy. We also see it as an investment in the future of Pocahontas County and the surrounding area.”

“This agreement represents not only a significant first step toward securing the future of the Green Bank Telescope, it also strengthens our ties within the state of West Virginia,” said Dr. Karen O’Neill, director of the facility. “I am extremely pleased to welcome our WVU colleagues as our partner, and I look forward to working with them more closely in the future.”

The Green Bank Telescope will track NASA’s Voyager I Spacecraft, which left the solar system in August, becoming the first man-made object to enter interstellar space.  Read more about Voyager I at http://voyager.jpl.nasa.gov/.