On August 21, 2017, something truly phenomenal will happen! For the first time in 89 years, the United 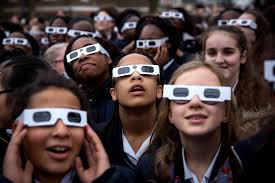 States, as well as all of North America, will have the opportunity to see a total solar eclipse.

Starting at 10:15 a.m. in Oregon and ending at 2:48 p.m. in South Carolina, the Great American Eclipse will take approximately one hour and 40 minutes to cross the country. A partial eclipse will be visible throughout the whole county for up to 3 hours, but the total eclipse will only be visible across a narrow swath of the country for a mere two minutes and 40 seconds.  To see a timeline of the eclipse, click here.

1928 was the last time that a total eclipse stretched across the entire continental United States.  The path of the 2017 eclipse is remarkably similar to that of 1928 and will provide a great opportunity for scientific research.

While partial eclipses are fairly common, a total eclipse is only possible on Earth and occurs when the 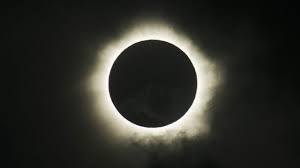 moon is directly in front of the sun.  On August 21, those wearing proper eye-wear will have the opportunity to look straight at the sun’s outer atmosphere–the corona–which will appear as beautiful, white rays that stream off the sun’s core.  No one should ever look directly at the sun, but on August 21, those with eye protection will have the very rare opportunity to experience a scientific phenomenon. For information on how to safely view the eclipse, click here.

Beyond the sheer beauty the Great American Eclipse will bring, it also will provide a wonderful opportunity for science.  NASA is supporting a myriad of projects this summer to glean information from the Great American Eclipse. Students and faculty from West Virginia University and Marshall University are also taking part in activities centered on the eclipse with support from the NASA West Virginia Space Grant Consortium and the Green Bank Observatory.

“Student teams from 31 states are supported by the National Space Grant College and Fellowship Program to participate in this unique opportunity to engage the public and provide hands-on experience for hundreds of students who are building scientific payloads to fly in high altitude balloons at the time of the eclipse. We are happy to be able to support a team from Marshall University to represent West Virginia in this nationwide effort,” said Dr. Majid Jaridi, Director of the NASA WV Space Grant Consortium.

A team of three Marshall students-Nick Zarilla, Derek Staley, and Jacob Staggs–will travel to Cobden, Illinois as one of more than 60 groups participating in the Eclipse Ballooning Project.  The team’s mentor, Dr. Jon Saken, said the students “will launch a high-altitude balloon to approximately 100,000 feet to send back live still and video images of the August 21st eclipse, as well as testing an autonomous 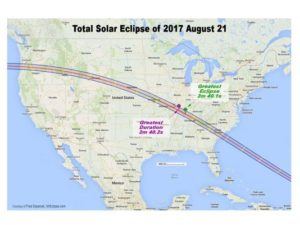 target acquisition system of their own design.”

The WVU Department of Physics and Astronomy and WVU Extension, with the help of the Green Bank Observatory and the NASA West Virginia Space Grant Consortium, are also involved in bringing the Great American Eclipse to West Virginia.  Projects include providing 6,000 safe-viewing glasses, Summer Science Kits for 4-H camps, and a pre-Eclipse event on August 19 at the WVU Department of Physics and Astronomy.  To learn more about WVU’s efforts, click here.

WVU Physics Professor Kathryn Williamson said, “We are absolutely thrilled to be able to bring safe-viewing eclipse glasses to students around the State. Requests from WV educators are pouring in. So far, we have over 200 requests for over 15,000 glasses, and counting!”  To inquire about free safe-viewing eclipse glasses for your students click here.

Universities and groups across West Virginia are preparing to make the most out of the Great American Eclipse.  Where will you watch?  Now is the time to make YOUR plans to experience this unusual phenomenon!