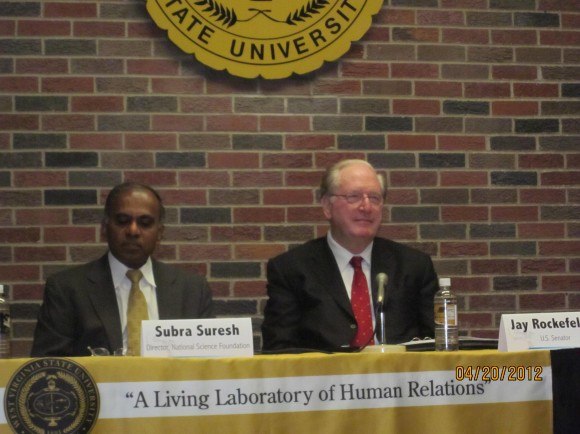 The Director of the National Science Foundation (NSF), Dr. Subra Suresh, addressed participants at the Science, Technology and Research Symposium in April and praised the EPSCoR program as critical to the success of the country, noting that “good ideas come from everywhere.” The NSF’s role is to create knowledge and sustain research, and Dr. Suresh reviewed the fruits of government-funded research, including rapid prototyping (has helped to keep the U.S. competitive), nanotechnology (creating thousands of new jobs), and GPS (creating jobs and everyday products). In the 1990s, the NSF funded two young researchers who later founded Google.

Research conducted at the National Energy Technology Lab in Morgantown led to the technological innovation that made it possible to drill horizontally, leading to the development of the Marcellus and Utica Shale plays. Natural gas production offers opportunities for new tech innovations, which could stimulate more economic growth. Research remains fundamental to that growth, and as Dr. Suresh said, “Innovation is a contact sport.” TechConnectWV works to bring people together in the innovation ecosystem, to help researchers turn their good ideas into enterprise. We need everyone to get on the field to make this happen. Join us!