View of earth from near space satellite.

Students at South Charleston High School (SCHS) successfully launched and recovered a near space satellite that traveled 98,425 feet above Earth’s surface on April 19, after months of study, design, and preparation.

Preparation of balloon for flight.

Joe Oliver, SCHS’s computer science teacher, partnered with local businessman and engineer Jeff Imel to work with the students for the past year in designing and assembling the near space satellite.   Imel is the founder of Air Robotics, a Charleston-based company that designs and builds small, unmanned aircraft (drones).

Students from a variety of subjects participated in the preparation and launch, from math and physics to English.  They created a video, and other photos can be viewed here: 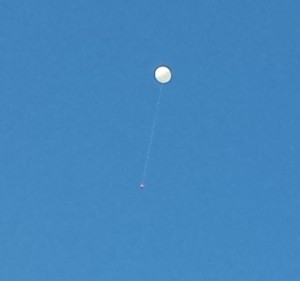