That’s how Craig Hartzell characterized the first few years after he founded Azimuth, at the time an engineering services company based in Morgantown, West Virginia. 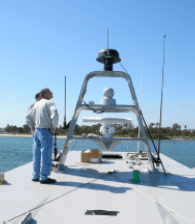 Azimuth employees inspect the radar and communications arch on an ocean-going vessel.

“It was a typical startup,” Hartzell said, describing the various growing pains the company experienced after its doors opened in 1989—everything from the tangible (lack of connections within the industry) to the existential (an ever-present fear of failure).

Decades on, the company has been awarded a National SBA District Director Award, and named an Inc. 500 Corporation and Veteran Small Business Advocate of the Year, and its president and CEO can look back on that early period with a sense of triumph. But Azimuth’s success, he admits, would likely not have been possible without a few helping hands.

“We received a lot of help from the military community, politicians, and the state of West Virginia,” he said. “We survived and thrived.”

One of those boosts arrived in the early 1990s in the form of the Department of Defense’s newly founded Mentor-Protégé Program, under which the government aimed to help nurture business growth by pairing small companies with larger, more experienced counterparts within the same industry. Azimuth was the seventh firm accepted to the budding program, according to Hartzell, and the partnership proved a timely boost.

Azimuth was paired with Electronic Warfare Associates, a Virginia-based software company that helped the young company establish an accounting system and navigate its first classified contract. They also offered marketing and branding assistance. Soon, Azimuth had balanced its books and begun developing a strong reputation for high quality work within the defense sector. 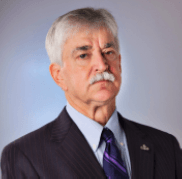 “That really set us up for being successful. That active relationship with the founder of EWA and their entire staff really kick-started what we were doing,” Hartzell said. “We still support each other all these years later.”

“We worked as a subcontractor on high-speed boats, but after that SBIR was awarded to us it gave us a shot to expand and improve on what we already knew,” Hartzell said. “It opened the doors to the maritime sector for us and has led to many, many opportunities over the years.

“Working for SOCOM was an absolute privilege,” he added. “I was highly motivated and, as we always do, we delivered more than we proposed.”

Azimuth, which had by the time expanded to include manufacturing and engineering, found its sea legs in the maritime industry. The company developed a diver tracking and monitoring system it called Diver 6, which has since been added to the Navy’s “Approved for Military Use” list. The company has also worked with the National Oceanic and Atmospheric Administration, retrofitting its military-grade ship systems for use on the small research vessels in the NOAA fleet.

From initially struggling to stay on its feet, Azimuth has transformed into the industry leader for open cockpit electronic systems, all thanks to that first SBIR, Hartzell said.

“We’re huge fans of the SBIR program. It really does work,” he said. “We currently hold long term, multi-year contracts related to that SOCOM SBIR. It was extremely important to this company; it was that little shot of money and the connection to the customer that allowed us to grow to where we are today. 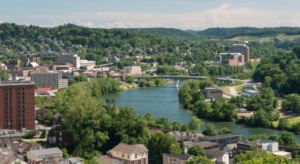 Morgantown, WV–home to Azimuth and WVU

“It’s difficult for any small business to succeed,” he continued. “Getting your foot in the door, that’s the big hurdle. But if you give small businesses a chance with programs like the SBIR, we can move so much faster and at a much lower price than the big guys.”

Azimuth has added offices in Virginia, Maryland, and North Carolina, but the company’s home base remains its building located a stone’s throw from West Virginia University — a convenient pipeline for talented engineering graduates. Hartzell’s core team has stayed much the same, but the business’s standing within the industry means it can now be more selective about the jobs it takes on.

“I and my team only go after work that is technically challenging and with businesses that are very serious about what they do. Life’s too short and if the customer isn’t serious, how can you be?” Hartzell said. “We have very low turnover because we take care of our people really well. But also because the work they’re performing is worth doing.”

Part of this work will continue to come through the SBIR program as Azimuth typically bids on several SBIR contracts every year. Overall, it’s a program that is both a great indicator of where the company is going but also a reminder of the long, occasionally bumpy road it’s already traveled, Hartzell said.

“So much of our success is tied back to the SBIR program,” he said. “The government gets a lot out of the investment, but so have we.”