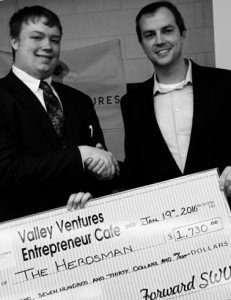 Evan Dodrill of Shady Ridge Enterprises is congratulated by Joe Carlucci, SBDC Business Coach and Director of The Hive, small business incubator on the campus of WVU Tech in Beckley.

Shady Ridge Enterprises took home $1730 to perfect the prototype for Evan Dodrill’s animal tracking system, called the Herdsman on January 19 at the Valley Ventures Café.   This was the Asbury resident’s second and final time to enter the competition and the audience selected his project in a close contest. His product has been refined and expanded to include smart phone tracking for any size animal, including cats and dogs.   His display featured “doggie bags” with take home animal treats, as well as a laptop demonstrating the features of drawing a “safe” perimeter for animals that when breached sends an immediate alarm to the owner’s smart phone.

“It was gratifying to see the progress that Evan has made in having a quality market ready product that solves a problem for so many. Evan also credited Launch Lab at WVU for helping him to get started. This Valley Ventures event was a part of the grand opening of The Hive, small business incubator which features the Launch Lab and so many more resources now available to students and fledgling entrepreneurs in southern West Virginia,” stated Valley Ventures program manager, Katie C. Ickes.

With three agriculturally based entrepreneurial projects being showcased, the attendance of Agriculture Commissioner Walt Helmick was appreciated. Commissioner Helmick and a large audience of crowd-funders learned about the micro green production of Allegheny Genesis with Jordon Masters of Ronceverte, WV and the Bio Soil Production Facility project of Jason Walker of Green River Gardening Center in Daniels.   All three have potential to provide economic growth for the state. Two entrepreneurs encouraging fitness and also complementing or utilizing our natural resources were also highlighted. Baddlun.com and Adam Stephens of Fayetteville has plans to expand triathlon type competitions in the area.   While Kevin Traube of the Outside- In climbing gym of Harper Road in Beckley is already partnering to provide “practice space” for outdoor adventurers and adding another great activity for tourists and locals alike while encouraging youth to be active in new way.

During the intermission for vote tabulation, Bluefield State Business majors, Amanda Cokely and John Stone pitched their ideas to the audience. They were accompanied by Associate Professor Geoff Hunter.

Gratitude was expressed to Vision Shared, BB&T and Pasquale’s Restaurant for their sponsorships which made the event possible. Valley Ventures and its predecessors in the region have conducted 15 competitions in southern West Virginia since 2012. The Valley Ventures partnership includes New River Gorge Regional Development Authority, New River Community and Technical College, Region 1 Workforce Development Board and Greenbrier Valley Economic Development. A competition is planned for spring in Mercer County. For more information, please go to www.gvecafe or call 304-667-7027.