Derek Dotson was a security worker in the mining industry in Southern West Virginia. Seeing an increasing number of layoffs in the industry and even mines closing, Dotson decided to pursue a degree in Electrical Engineering Technology at Bluefield State College. 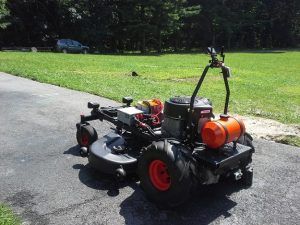 Autonomous and Radio Controlled Equipment’s radio-controlled, zero-turn vehicle. The Center for Applied Research and Technology, a ScaleUp West Virginia sub-awardee, is helping the company develop the vehicle’s prototype and a strategy for moving the product to market.

Through courses at Bluefield State, Dotson and some of his classmates became interested in the growing field of remote-controlled equipment and their industrial applications. A natural entrepreneurial spirit led Dotson and his partners to create Autonomous and Radio Controlled Equipment (ARCE), a company that specializes in designing and building autonomous and radio-controlled systems for a variety of equipment and applications.

Dotson’s background also includes work as a landscaper. Drawing on his perspective and a collective experience with steep topography in places like Southern West Virginia, Dotson and his partners set out to develop a radio-controlled mower that would be durable enough to handle the type of rugged terrain that can present safety concerns for operators using riding and walk-behind equipment.

The group had a solid concept in mind but would need help to move their ideas from the drawing board to a working prototype.

The U.S. EDA’s and the State of West Virginia’s investment in ScaleUp West Virginia allowed the Center for Applied Research and Technology (CART) at Bluefield State College to provide technical assistance that was critical to moving Mr. Dotson and his team forward.

CART has proven and wide-ranging expertise in systems engineering, automation and robotics, and design for manufacturing. Drawing on that expertise, CART and Mr. Dotson completed a design, identified specific materials that would meet the vehicle’s specifications and manufacturing plans, and produce the first working prototype of the team’s radio-controlled vehicle. The zero-turn vehicle is primarily set up as a commercial mower for terrain that would be considered unsafe for manually-operated walk-behind mower or other standard power equipment. 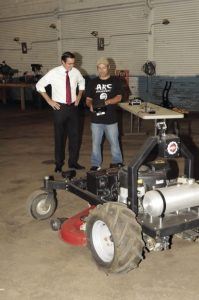 However, since ARCE’s equipment can be controlled remotely, its potential extends beyond commercial lawn and property maintenance and into markets related to first responder and other public safety applications.

CART also has provided the ARCE team guidance on business development assistance, the ARCE team has demonstrated the vehicle to key stakeholders and potential customers, including the West Virginia Division of Highways.

The story of Mr. Dotson’s path from security worker in the mining industry to college student and entrepreneur is a powerful example of West Virginia’s potential to diversify its economy.

The technical assistance provided by CART also is an excellent example of EDA’s and the State of West Virginia’s impact through ScaleUp West Virginia.  This could not have happened without their support.