What if you could take a discarded item and turn it into a source of light for people in third world, energy-poor countries?  And what if, at the same time, you could engage young people in a renewable energy project that taught them new skills? 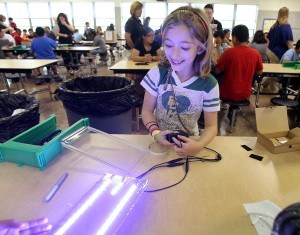 Using discarded campaign yard signs and a simple kit, Seaman and his team have taught young people/volunteers how to make solar-powered LED lights for regions of the world that have no access to light after the sun goes down.

Seaman said, “What we do is use a small 10 watt solar panel, a compact 2V/9Ah lithium polymer battery, and a set of super bright LED lights to provide enough light for a family to enjoy some of the quiet hours at night and for students to do their homework without inhaling harmful fumes from kerosene.”

“This can make an amazing difference in human lives, by providing not only light, but also enough charge for a cell phone or other small device,” he added.

Since its founding in 2009, New Vision has produced more than 2200 lights and placed them in 32 countries around the world.  In recognition of this accomplishment, the firm received an “E-Chievement Award” in 2014 from eTown, a show produced for National Public Radio in Boulder, CO.

This fall, New Vision is partnering with The Dwyer Group, an international enterprise that acts as the parent company for eleven service-based franchise companies and represented by over 2,100 franchise owners in ten countries. A company-wide corporate social responsibility program, the Light Haiti project has brought together franchise owners, employees as well as local schoolchildren, to help create over 800 solar lights that will light an entire village in Haiti through a community development program where families work 65 hours to improve the community in exchange for their solar light. 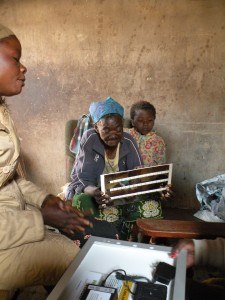 A happy recipient of a solar light in Kenya

“We offer a completely New Vision for both helping to solve energy issues while strengthening community relationships and involvement,” Seaman said.

The idea for New Vision Renewable Energy came out of a Sunday school class, and like the proverbial mustard seed of the Bible, the firm is showing remarkable growth.

A new product line in development is aimed at the sports and recreation market and would involve youth and creating a portable recreational arena that turns on after the sun goes down, offering unique possibilities for use both in the U.S. and abroad.

Seaman is working with the INNOVA Commercialization Group, the Robert C. Byrd Institute for Advanced Flexible Manufacturing at Marshall University, and the WVU College of Law Entrepreneurship and Innovation Law Clinic’s Student Intellectual Property Protection Services program to develop the product and protect the intellectual property.

Donations of PVC pipe from the Charlotte Pipe Company, used political signs from the Nebraska Republican Party and solar mirror film from the 3M Corporation have allowed this project to move forward.  Additional financial support is being sought for this new product venture and for the continuation of the Global I.M.P.A.C.T. youth mentoring network.  West Virginia has the lowest workforce participation rate in the country for young people ages 16-24 and less than 50% of the people that age are not in school or working.  A more detailed announcement will be made later this summer.