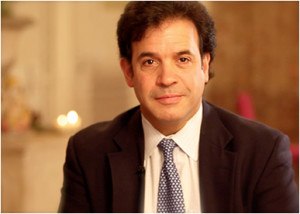 Over the past three decades Dr. Rudolph Tanzi, a 1976 delegate to the National Youth Science Camp, helped discover many of the genes responsible for Alzheimer’s and other neurological diseases. He also co-authored the popular books “Decoding Darkness” and the New York Times Bestseller, “Super Brain”. He was named by GQ magazine as a Rock Star of Science, and in his spare time, has played keyboards with the band Aerosmith.

Dr. Tanzi will be the featured presenter at a National Youth Science Foundation event, to be held at 6 p.m. on December 2, 2015 at the University of Charleston in Charleston, WV.

In Dr. Tanzi’s presentation – “Decoding Alzheimer’s Disease: From Genes to Therapy” –  the genetic and environmental factors contributing to risk for Alzheimer’s disease will be reviewed along with emerging therapeutic strategies for treating and preventing this devastating disease. In addition, the effects of Alzheimer’s disease on the brain, mind, and consciousness will be considered. In particular, the question of how the concept of “self “can be further refined in view of the effects of Alzheimer’s on the brain and mind will be discussed. Further elucidation of the relationship between brain function, mind, consciousness, and the cosmos will also be presented based on the concepts put forward in Dr. Tanzi’s recent book “Super Brain,” as well as his new book (Nov. 2015), “Super Genes,” co-authored with Dr. Deepak Chopra.

There is no cost to attend the event, but registration is required.  To register for the event, click here.