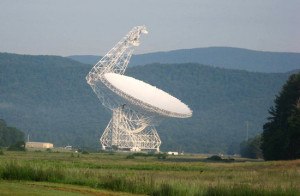 advancing scientific research, and its status as an iconic organization in West Virginia.  Discoveries made at the Green Bank Observatory have added to the body of scientific knowledge, led to additional advancements in understanding of our universe, and engaged students and scholars of all ages throughout the decades.

The purpose of the public scoping process is to determine relevant issues that will influence the scope of the environmental impact statement analysis, including identifying viable alternatives for the Green Bank Observatory operations.

Alternatives to be evaluated in the EIS will be refined through public input, with preliminary proposed alternatives that include the following:

TechConnect believes it is critically important to let the National Science Foundation know how valuable the Green Bank Observatory is to West Virginia and field of science.  We encourage the public’s engagement on this issue.  Below are several important points about the facility that can be included in comments to the National Science Foundation.

Information about the Green Bank Observatory can be found at https://greenbankobservatory.org/about/.

Public comments can be sent to the National Science Foundation at the following address.  For our records, we appreciate receiving copies of any comments sent to the NSF. Our email address is included in the e-mail option below and our mailing address is also below.

You may submit written comments by either of the following methods:

Send an email: envcomp-AST-greenbank@nsf.gov with cc to eis@gbobservatory.org. The subject should read: Green Bank Observatory