Morgantown High School—Team 1and Suncrest Middle School—Team 1, Morgantown, captured the championship crowns in their respective categories in the 2015 West Virginia Science Bowl Regional for high schools and middle schools co-hosted on February 7, 2015 by the U.S. Department of Energy’s (DOE) National Energy Technology Laboratory and West Virginia University (WVU) at the Mountainlair on the WVU main campus. 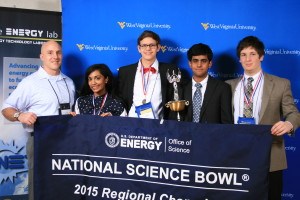 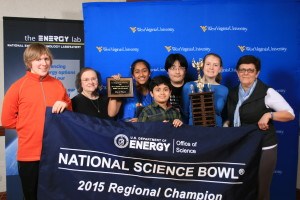 respectively. These four teams emerged from a field of 11 teams competing in the middle school competition held on February 6 in its inaugural year at the Mountainlair.

At the National Science Bowl®, High School will compete against elite high school science teams from around the country.  The students will have the opportunity to participate in science seminars and hands-on science discovery team challenges. Top teams will receive trophies and other awards, including science trips.  The U.S. Department of Energy (DOE) created the National Science Bowl® and regional competitions to encourage high school students from across the nation to excel in math and science and pursue careers in those fields.

This year’s event included the welcoming address from U.S. Rep. David McKinley, W.Va. District 1, and welcoming remarks from NETL Director Dr. Grace Bochenek and WVU President E. Gordon Gee. All three speakers praised the students for their achievements and encouraged them to have fun as they competed in today’s event.

NETL is a U.S. Department of Energy national laboratory that produces technological solutions to America’s energy challenges. For more than 100 years, the laboratory has focused on developing tools and processes to provide clean, reliable, and affordable energy to the American people. Three NETL research sites—Albany, Ore., Morgantown, W.Va., and Pittsburgh, Pa.—conduct a broad range of energy and environmental research and development activities that support DOE’s mission to advance the national, economic, and energy security of the United States.