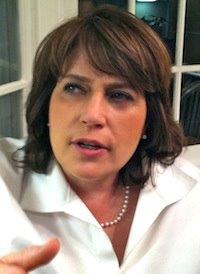 An ophthalmologist and president and CEO of the Huntington Retina Center, Skolik was honored with the 2013 Outstanding Woman in Technology award for her retinopathy research and invention of devices to assist with eye surgery. She is the founder of the American Retina Research Foundation and heads up Eyedea Inc., an ophthalmic invention company.

Approximately 20 years ago, she observed that patients with long-term diabetes and co-existing arthritis seemed far less likely than their non-arthritic counterparts to develop diabetic retinopathy, the most common diabetic eye disease and a leading cause of blindness in American adults. The disease is caused by changes in the blood vessels of the retina.

Skolik hypothesized that the inflammatory joint proteins were providing a sort of innate protection. The search for the identity of this protective factor is the focus of her research. If the protective factor can be identified, it may be a critical link to understanding diabetes itself and could eventually lead to a “diabetes vaccine.”

Dr. Jan I. Fox, Marshall’s senior vice president for information technology and chief information officer, said she has known Skolik since high school, when they were debate partners.

“Stephanie Skolik epitomizes entrepreneurship. When I think of innovation, technology and a strong female leader, it is her name that comes to mind,” said Fox. “When she needed something for her work that was not available, she would just create a new device for ophthalmic surgery. Most people could only dream of holding a single patent, but she holds multiple patents for ophthalmic medical devices.

“Above all, she has used her intellect and skills to improve the lives of West Virginians. Eleven years ago she established the non-profit American Retina Research Foundation, which is based in Huntington, to provide financial support for diabetic retinopathy research. Her heart is as large as her talent.”

Skolik earned a bachelor’s degree from Marshall in 1981 and graduated from the university’s school of medicine in 1985. She was a finalist in the U.S. Olympic Trials in basketball in 1980 and a Rhodes Scholarship finalist in 1981.

In addition to being an assistant professor at Marshall’s medical school from 1994 to 1999, she has been a clinical instructor and fellow at the Yale University School of Medicine. From 1998 to 2002, she was a guest researcher at the highly acclaimed National Eye Institute in Bethesda, Md.

TechConnectWV is a non-profit coalition committed to the advancement of the high-tech economy in West Virginia. The awards banquet was held Tuesday in Morgantown.

Anne Barth, TechConnect’s executive director, said, “The ‘Spirit of Innovation’ program is an opportunity to spotlight success stories throughout the state, and recognize the people and organizations that support innovation-based economic development. By showcasing these creative efforts and the people behind them, we hope to inspire others who may have an entrepreneurial spirit. The 33 nominations received for this inaugural awards program demonstrate that in West Virginia, the innovation economy is not just a concept—it’s a reality.”