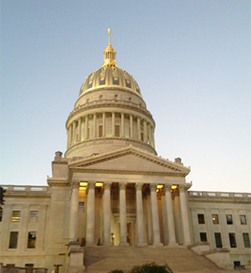 Network around the Capitol Rotunda with legislators, key state officials, manufacturers, innovators, entrepreneurs and colleagues.  Set up exhibits or demos in the House and Senate hallways for your company or organization.  Join us for lunch in the lower level Capitol Rotunda as we celebrate the 2016 winners of the Governor’s Award for Excellence in Industrial Energy Efficiency and the Governor’s Award for Leadership in Advanced Green Manufacturing.

“The goal is to showcase the groups and companies that are working to advance innovation and entrepreneurship across our state by having a large presence at the State Capitol on January 27, as well as those who wish to be included as participating organizations,” said Anne Barth, TCWV’s Executive Director.  During the last session, more than 130 groups and companies signed on in support.

Carl Irwin, Director of TransTech Research & Business Development Program, said the day provides an opportunity to network at the Capitol with legislators, key state officials, manufacturers, innovators, entrepreneurs and colleagues.  “This is a chance to brainstorm with colleagues about initiatives and polices that help create jobs, deploy innovative technologies, and promote new business development,” Irwin said.

EXHIBIT: For those who want to exhibit, space will be available in the hallways outside the legislative chambers.  The number of exhibit spaces is limited, so sign up today if you are interested.  The cost to exhibit is only $20 per table. Register online at https://www.eventbrite.com/e/2016-innovation-entrepreneurship-day-at-the-state-capitol-tickets-18801440615    Fees are: Exhibit $20 per table – Lunch $10 per person – Otherwise it’s free!

A block of rooms is being held at the Charleston Marriott for participants. Call 800-228-9290 by January 5, 2016 and ask for the “Innovation/Entrepreneurship” rate. Government rates may be available.

If you’d like to have your group listed as a participant in celebrating West Virginia’s Innovation Economy, email Barth at anne@techconnectwv.org.