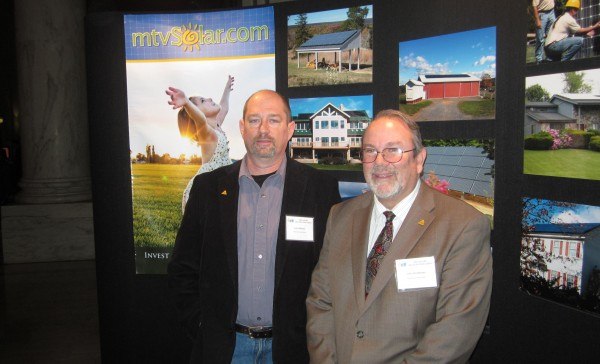 The natural gas industry is changing everything in West Virginia.

TechConnectWV hosted a panel discussion Tuesday afternoon in the House Of Delegates chamber for representatives from the four areas TechConnectWV focuses on to share the details of how that one industry is changing everything else.

“We need intellectual property that can be developed and turned into jobs,” said John S. Hooks Jr., director of CSC Identity Labs. “That’s one of the things TechConnect is trying to do.”

Anne Barth, executive director of TechConnect, moderated the panel and pointed out that each panelists represented one of the four areas of TechConnectWV – advanced energy, chemicals and advanced materials, biometrics and bioscience.

Derek Gregg, CEO of Vandalia Research, said his business location in downtown Huntington gives him a lot of visibility and opportunity to boost other business in Huntington.

“I put people in the hotel at Pullman for meetings and entertain them at Pullman,” Gregg said. “That whole area of downtown did not exist six or seven years ago.”

Leonard Dolhert, CEO of Aither Chemicals, LLC, said his company wants to build a cracker plant in West Virginia, but he knows it will take support from natural gas companies and the state.

“Things like site selection and tax credits,” Dolhert said. “I’d be disappointed if we didn’t get the same advantage as foreign corporations coming into the state”

Dolhert said his company needs to raise the capital to build a cracker plant, but the state’s long chemical history is a true asset for residents and businesses.

“The economic implications in the case of cracking are huge,” he said. “We want this to be a long-term, sustainable economic development, job-creating industry here over the long term, not just for West Virginia.

“I have a potential partner company from Europe who wants to use Aither technology, and they want to use ethane as feedstock, so they asked me if it will be around in 40 years. We need to look that far ahead and have those answers ready so we give confidence to everybody.”

Bob Orndorff Jr. of Dominion Resources said his company has had a lot of success in partnerships with community and technical colleges, but more is needed in the future.

“Dominion has been criticized for not hiring locally, and that’s not necessarily the truth, but the industry has been criticized because a lot of the technology has come from out of the state,” Orndorff said. “We’re going to have a real need to train West Virginians to take (out-of-state workers) place, and we’re working very diligently.”

Orndorff said the Northern Panhandle and north central region of West Virginia will continue to grow with development of Marcellus and Utica drilling.

Hooks said his industry may be stagnant in the next year, but reorganization will take place behind the scenes.

“I don’t think you’ll see a great deal of job creation,” Hooks said. “But with the completion of the Biometric Center for Excellence at the FBI property, they will consolidate some of its operations, the Department of Defense will put some of its operations in there, and in theory, other agencies will begin to move into that facility.”

Barth closed the panel by asking each participant what worries they have in their jobs that keep them up at night.

Gregg said he has too many to pick just one. Orndorff said his biggest concern is getting projects built on time and under budget.

And Hooks said his biggest concern is dealing with his own company.