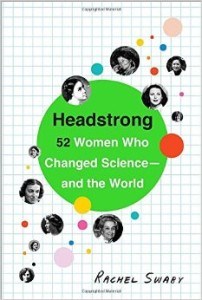 The Chancellor’s STEM Speaker Series that, thus far, has brought Alexandra Cousteau, John Medina and Steven Squyres to West Virginia, will continue into the summer with speakers lined up for June and July.

Dr. Jan Taylor, Director of the Division of Science and Research which organizes the series, said, “We have had a wonderful audience at each of our past events, and we hope to keep the STEM energy alive with these next two summer speakers.”

First up is Rachel Swaby, the author of a newly released book titled, “Headstrong: 52 Women who Changed Science – and the World.” She will be in Charleston on Thursday, June 11 at The Clay Center’s Walker Theater to discuss her book which covers Nobel Prize winners and major innovators as well as lesser-known but significant scientists who have had far-reaching influence. Swaby’s vibrant profiles of 52 women span centuries and illustrate how each scientist’s ideas developed, from their first moment of scientific engagement through the research and discovery for which they’re best known.

Taylor said, “Rachel’s audience will be captivated by her stories of these science heroines and perhaps some will also be encouraged and inspired to help the next generation of girls put on lab coats!”

Charleston bookstore Taylor Books will sell copies of her Headstrong book at the event, and Swaby will be available for a book signing after her presentation.

On July 16, Leonard Mlodinow, who recently co-authored a book with Stephen Hawking called “The Grand Design,” will be in Charleston to discuss why, according to quantum theory, the cosmos does not have just a single existence or history, but rather that every possible history of the universe exists simultaneously. Mlodinow currently teaches about randomness to future scientists at Caltech. He also has written for television shows, including MacGyver, Star Trek: The Next Generation, and Night Court. He also is a producer, executive producer, and designer of several award-winning video games created in conjunction with Stephen Spielberg, Robin Williams and the Walt Disney Company.

Both events are free and open to the public, but RSVPs are requested.

The Chancellor’s STEM Speaker Series is organized by the West Virginia Higher Education Policy Commission’s Division of Science and Research with support from a federal grant from the National Science Foundation. The goal of the series is to promote the importance of research and the science, technology, engineering and math (STEM) fields to the general public in West Virginia.

The Division of Science and Research directs the EPSCoR program in West Virginia, while also managing other state and federally-funded academic research programs across the state. The program provides strategic leadership for infrastructure advancement and development of competitive research opportunities in STEM disciplines.