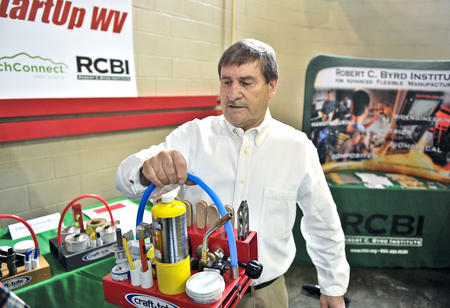 Imagine walking into a computer lab with an idea for a new product and walking out with a full-size working model.

That’s what happened to Timothy Bell, owner of Bell Mechanical in Dunbar.

Bell has a side business, Craft-Totes by Bell, inspired by his work helping to construct the Toyota plant at Buffalo 15 years ago. He saw how Toyota constantly strives to simplify its manufacturing processes and improve workplace ergonomics.

He was inspired to design a line of handy carry totes for plumbers, electricians and others but knew he needed to streamline his manufacturing process.

The Robert C. Byrd Institute for Advanced Flexible Manufacturing helped him come up with a simplified tote design that can be assembled with a few pop rivets. The institute also helped by allowing him to use a powerful water jet machine to precisely and quickly cut the totes out of sheet metal.

Bell said people who see his totes urge him to make special ones for their industry. He already makes a tote for coal mine air monitors, and he’s been approached to make a drill bit tote.

Bell recently came up with another idea: a device that fits on his custom totes and carries long brazing rods used by plumbers. He needed one to show prospective customers. So he went to the computer-aided design lab the Byrd Institute operates on Marshall University’s South Charleston campus.

Christopher Figgatt, the lab’s production engineer, helped Bell create a three-dimensional design for the device. Then they went downstairs and made a full-size working model using a 3-D printer.

The printer uses micro-thin layers of thermoplastic material to produce a working model of an object from a computer-aided drawing.

Three-dimensional printers are considered one of the best ways for entrepreneurs to get their ideas from a drawing on a napkin to a working prototype – a crucial, difficult step in the business development process. But 3-D printers aren’t cheap.

Charlotte Weber, director and chief executive officer of the Byrd Institute, said the printer in South Charleston – the largest in the state – cost about $750,000. That puts it out of the reach of small businesses.

But a new grant program puts the printer and other expensive equipment within the reach of Bell and other entrepreneurs. The grant program is a joint effort of the Byrd Institute, a nonprofit named TechConnect West Virginia, and the state Department of Commerce.

Anne Barth, TechConnect’s executive director, said the organization won a $250,000 grant from the federal Economic Development Administration, which the state Department of Commerce matched. She said $85,000 has been set aside for “StartUp WV Manufacturing,” which gives businesses time to design and build products using the Byrd Institute’s equipment.

On Monday, the first round of grants was awarded to seven entrepreneurs, including Craft-Totes by Bell.

Grant recipients will each receive up to $10,000 worth of time and counseling from the Byrd Institute, Barth said.

Bell said that with his grant, “I have the opportunity to do whatever comes next.”

Tessie said, “Some people tell us they love our work but can’t afford a gate or fire screen.” However, those customers can afford an ornament, which the Wallaces sell for $20 to $35.

But cutting ornaments out of thick metal is a slow, labor-intensive process – unless you have access to a water jet machine.

Matt said, “What would take 20 minutes to do by hand, we can do in maybe one minute with the water jet. Having the machine time is great. Last year we made about 400 ornaments. With the grant, we can make over 1,000 this year.”

Tessie is already planning to expand Wallace Metal Works’ customer base by attending an October craft show in Richmond, Va., and she plans to travel to other shows in surrounding states in future years.

Barth said, “Thanks to Gov. Earl Ray Tomblin and the Legislature for providing TechConnect with matching funds that allowed us to compete and win the federal grant that makes the StartUp WV grant program possible.”

Keith Burdette, secretary of the state Department of Commerce, said, “I’m often reminded that now that we are in the position to competitively attract businesses to the state, it is awfully important to grow our own by helping those who have new inventions, new manufacturing possibilities.

“We have a long history of manufacturing,” Burdette said. “For all practical purposes, we invented the chemical industry in this valley.”

As for the companies awarded grants on Monday, “Their success will be their own,” Burdette said. “We have all come together to push these projects down the road. We’re a pretty small state. We have to maximize our resources.”

For more information about the grant program or for an application, call the Byrd Institute at 1-800-469-7224 or visit www.rcbi.org or www.techconnectwv.com.