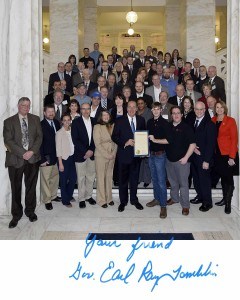 Innovators and entrepreneurs from around the state filled the rotunda and hallways of the State Capitol on January 29 for “2014 Innovation & Entrepreneurship Day.” Co-sponsored by TechConnect West Virginia and Industries of the Future-WV, the event drew nearly 150 people to Charleston to show support for West Virginia’s innovation economy.

Forty-six exhibitors from a wide variety of industry sectors and organizations demonstrated that innovation is alive and well across the state.  Nearly 130 entities joined the effort as participating organizations, up from 85 last year. (Click here to see list: 2014 Innovation & Entrepreneurship Day Participating Organizations List)

“For the second year in a row, we achieved our objective to showcase innovation companies, entrepreneurs, manufacturers, lending organizations, technical assistance groups, agencies, and firms that make up the state’s innovation economy,” said Anne Barth, Executive Director of TechConnectWV.

“The wide variety of exhibitors helps to demonstrate the steps in the innovation lifecycle—from research and development, to commercialization and startup, to a new business gaining a sound financial footing—and what is needed to help the entrepreneur at each step,” she added.

Exhibitors included eTouchSciences, led by CEO and WVU Mathematics Professor Dr. Marjorie Darrah, which was the 2013 winner of TechConnect’s Spirit of Innovation award in the startup category.

“The event also was another good indicator of how this sector of the state’s economy is becoming more widespread and self-sustaining.  Our entrepreneurs range from students to people who are launching a second career, and all of them are making a positive impact on the economy in their communities and across the state. 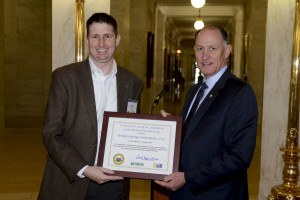 “We even heard from one exhibitor who reported that they may have generated significant new sales by participating in the event,” Barth said.

Other highlights of the day included Governor Earl Ray Tomblin issuing a Proclamation making January 29 “Innovation & Entrepreneurship Day in West Virginia,” which noted that “facilitating innovation-based economic development and the growth of entrepreneurial companies are critical to our state’s future and prosperity.” 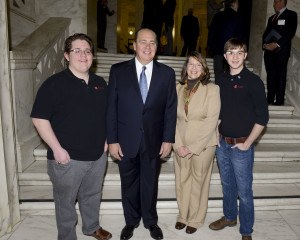 This event was just one of several that week in Charleston, creating “Innovation Week.”  On January 28, the 4th Annual WV Biosciences Summit was held, featuring West Virginia native Dr. Mark Bates as the keynote speaker.  Read more about his fascinating journey in medicine and innovation in the Daily Mail and the Gazette.  Thursday, January 30, was Undergraduate Research Day at the Legislature, with exhibits from colleges and universities around the state.  Economic developers from around the state gathered January 29 for the WV Economic Development Conference.

To see more photos from Innovation and Entrepreneurship Day at the State Capitol and the 4th Annual WV Bioscience Summit, visit TechConnectWV’s page on Facebook.