WHEELING – Equal opportunities are still a concern for women in the workplace, according to West Virginia University Provost Joyce McConnell.

“Women have to be willing to claim their space,” McConnell said. “If you don’t put yourself out there and apply for jobs you’re saying ‘no’ to yourself. Let someone else do that.” 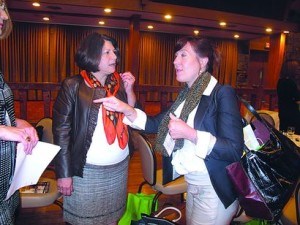 McConnell said some previous mentors in her life did not believe women could achieve certain workforce feats.

“There is still discrimination against women in the workforce. I don’t think it’s always intentional, and it’s how we were raised,” McConnell said. “I was number one in my high school class and had just skipped my senior year, when my counselor told me I was so smart, that I could be an executive secretary. If I would have just believed her, I wouldn’t be here today.”

“Women are under-respresented in STEM and technology jobs across the board,” Barth. “This is an effort to bring together women from all professions to find strategies for increasing those numbers and address issues like the pay gap and finding untapped potential through women in technology.”

Danica Lohmeyer, an independent consultant, attended the conference for the first time this week.

“We need to remove the stigma that women are held back in any way, shape or form, period,” Lohmeyer said. “The stigma is there but we don’t have to acknowledge it. I think the women we saw here today are successful because they ignored those obstacles.”

“It’s one thing to hear advice, but it’s another to hear relevant stories that can apply to my life,” Credle said. “The conference has helped me identify my strengths and connected me to resources I can use once I return home.”