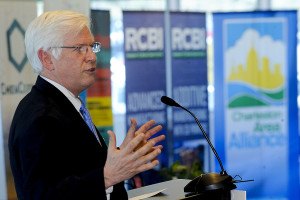 The only incubator in the nation focused solely on commercializing chemistry-based technology, ChemCeption is an innovation hub for any technology involving chemistry, from traditional to green, water to plastics, biotechnology to energy, and more.

“This is a great initiative and I am elated to see that West Virginia is taking the lead,” Babe said.  “Commercialization is the key ingredient to real innovation, and ChemCeption is well positioned with both uncommon infrastructure and uncommon expertise at the West Virginia Regional Technology Park.”

ChemCeption will kick-off with three start-up companies from West Virginia, a larger anchor tenant, and an affiliate member that is a start-up headquartered in Florida (EigenChem Technologies Inc.).

The inclusion of an affiliate member demonstrates the uniqueness of ChemCeption — a combination of both rare commercialization facilities at the WVRTP and exceptional commercialization expertise with one of CAZ’s strategic partners, the Mid-Atlantic Technology, Research & Innovation Center (MATRIC).

EigenChem is coming to ChemCeption to work with MATRIC and utilize the large scale laboratory or pilot plant facilities at the WVRTP.  Dr. Alexander Oliferenko, President of EigenChem, said, “If you want to scale-up and commercialize your technology, ChemCeption is the place to do it.  They have the facilities and the know-how.”

Dr. Kevin DiGregorio, executive director of the Chemical Alliance Zone and the Director of ChemCeption, said, “We are excited to assist entrepreneurs and small companies not only get their technologies to market, but also create wealth and jobs in our community, our region, and even the nation.”

In fact, INNOVA and WVSBDC will provide comprehensive entrepreneurial, start-up, and business services to ChemCeption clients, and MATRIC will provide technical expertise and support.

“We are pleased that the new incubator is taking flight,” Anne Barth, Executive Director of TechConnectWV said.  “This is an important project for the state’s innovation economy and a key vehicle for launching new technologies from our entrepreneurs, start-ups, and small companies.” 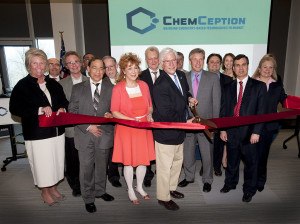 Various dignataries cut the ceremonial ribbon on the launch of ChemCeption.

It is no coincidence that ChemCeption is being launched within the cradle of the petrochemical industry, where innovation in the 1920’s and before led to the world’s first cracker, the rise of Union Carbide Corporation, and the development of one of the leading commercialization centers in the world, the former Union Carbide and Dow Technical Center (and now the WVRTP).  It is also no coincidence that ChemCeption is situated in the heart of the Marcellus Shale formation, one of the world’s newest and richest sources of ethane that is transforming the chemical industry and manufacturing in the United States.

“It’s exciting to see new innovation in a place where decades of innovation led to products we all use and rely on every day, from car seats to carpeting and antifreeze to trash bags,” DiGregorio said.  “After all, new chemicals and polymers and new uses of those materials are the starting points for new products like iPads and iPhones.”

The Claude Worthington Benedum Foundation provided funding for the development of ChemCeption through a grant to TechConnectWV.