West Virginia’s statewide bioscience industry grew 6.9 percent – employing nearly 6,400 workers – since 2007, according to a new study by Battelle and the Biotechnology Industry Organization (BIO) reporting national and state statistics for the bioscience industry in the U.S.

The “Battelle/BIO State Bioscience Jobs, Investments and Innovation 2014” report was announced during a news conference on June 24 during the BIO International Convention taking place in San Diego.

According to the section of the report dealing with West Virginia:

Bryan Brown, executive director of the West Virginia Bioscience Association, said, “This is great news that reflects the growing culture of innovation and entrepreneurism in our state, as well as the increased focus on bio-related research and development by our research universities, like West Virginia University and Marshall University, among others.”

The study can be found online here.

The BIO International Convention is the largest annual event for the biotechnology industry, attracting an audience of more than 15,000 biotech business leaders, scientists, executives and investors from around the world. 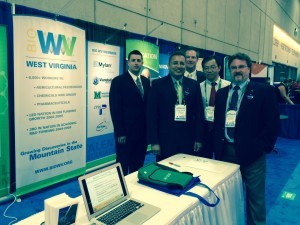 Brown said, “Not only is the West Virginia Pavilion highlighting the outstanding bioscience companies operating in West Virginia and the cutting-edge biomedical research underway at our universities, we are also showcasing all the state has to offer in terms of quality of life and increased business competitiveness. We hope our participation will help to attract new entrepreneurs, inventors, researchers, investors and businesses to West Virginia.”

“Our partners will hold numerous meetings throughout the week with prospective customers, collaborators and investors. This is a premier networking opportunity for the state and we appreciate the support provided by the West Virginia Development Office and the Claude Worthington Benedum Foundation,” Brown said.

For more information, contact Bryan Brown at bryan@browncomm.com or (304) 546-5500. You may also visit the website at www.biowv.org.