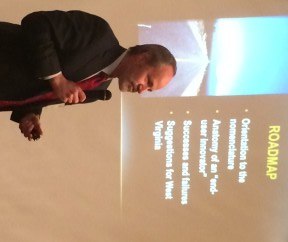 The 4th Annual West Virginia Bioscience Summit drew a record crowd of legislators to the opening night reception, featured a variety of panels and presenters, and was energized by keynote speaker Dr. Mark Bates, who addressed “The Seeds of Innovation.”

With more than 40 legislators in attendance, the reception offered clear evidence that the profile of the biotech sector in West Virginia has risen significantly since the formation of the Bioscience Association of West Virginia (BioWV) in 2009.

“It’s gratifying to see the support for the biotech sector from our state’s lawmakers because it shows that our work to support and foster home-grown firms is paying off,” said Bryan Brown, Executive Director of BioWV.

This year’s summit, which attracted nearly 100 attendees, featured panel discussions on university research being conducted at a number of higher ed institutions around the state, clinical trials underway, and profiles of leading biotech companies in West Virginia.

Brown added that experts also addressed the all-important questions of how to commercialize university research and where to seek opportunities for funding.

West Virginia native and physician/inventor Dr. Mark Bates delivered the keynote address.  The holder of 25 patents with many more pending, Dr. Bates said, “Nothing is more valuable than the life sciences,” adding that he opted to return to West Virginia after his residencies, despite criticism from colleagues.

He discussed the “anatomy of an end-user innovator,” noting that difficult medical cases have spurred him to develop innovations to solve medical challenges, including stroke, carotid artery function, heart attacks, and more.

An end-user innovator “doesn’t like to lose and won’t take ‘no’ for an answer,” Dr. Bates said.

In 2005, he started an accelerator in Charleston to explore and develop medical devices to improve outcomes for patients.  Backed by angel investors, he brought devices to market, including the smallest heart stent, later forming Nexeon MedSystems.

The firm went public just as the market collapsed in 2008, which led to layoffs.  While it was a difficult time, he said “that’s what an entrepreneur is—the one who takes responsibility.”

After spinning out other technologies, the firm merged with Celo Nova, and a holding company was formed for their intellectual property.

Dr. Bates’ experiences in launching a firm and shepherding it through early stage, startup, and growth have led him to make recommendations for West Virginians who want to prosper in the bioscience sector:

Dr. Bates referred to TechConnect’s Blueprint for Technology-Based Economic Development as an excellent guide for developing the bioscience industry, noting that it lists the important steps that must be taken to foster innovation and entrepreneurship:

“We need a renaissance in Appalachia, with leadership, investment, and effort” to build and sustain the bioscience sector, Dr. Bates said.

Read more about his fascinating journey in medicine and innovation in the Daily Mail and the Gazette.

See photos from the event on TechConnectWV’s Facebook page.