More than 160 entrepreneurs, researchers, investors and industry representatives joined the conference, which attracted participants from nine regional states and Washington DC, as well as students from WVU’s Solar Decathlon team and the MARS Robotics team based in Morgantown. 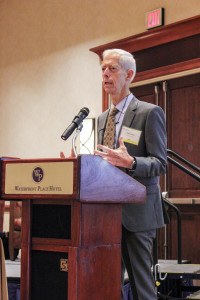 Conference organizer Carl Irwin coined the term “TransTech” to mean transition technologies and strategies that move along the pathway to a lower-carbon, industrially competitive, and globally sustainable economy of the future.  He said the goal is to create an entrepreneurial ecosystem that encompasses startup companies, investors, and established companies that can be customers or strategic partners of the startups.

Dr. Grace Bochenek, director of the National Energy Technology Laboratory (NETL), addressed the conference and offered words of encouragement to entrepreneurs.  “Our country needs you to help solve our energy challenges,” she said, adding that “we need more good ideas from smaller organizations and entities.  These could be the source of great break-throughs.”

Keynote speaker Dr. Lee Todd, former president of the University of Kentucky, said his own experience as an entrepreneur informed his efforts at UK to promote tech transfer, commercialization, and entrepreneurship.  “I learned I was an entrepreneur, not an inventor.  Inventors stick with it until they crash and burn. I had to make money,” Todd said.

While at UK, he helped secure passage in 2000 of Kentucky’s Innovation Act, which led to the creation of the state’s Innovation Network to help commercialize technologies and assist business startups.  A key component of the legislation provided matching funds for SBIR/STTR grants, which moved Kentucky from 44th place in the nation in SBIR/STTR awards to 27th place.

He initiated an “entrepreneurial leave” policy at UK, formed “E-Clubs” for entrepreneurial students, and started an angel investment fund.  “Kentucky people who start companies in Kentucky will stay in Kentucky,” Todd said of the economic development strategy they used.  “If you give away cheap land and labor, there will be someone later who gives it away cheaper and you’ll lose companies.”

He said the nation needs graduates from Kentucky, West Virginia, and Pennsylvania, and students need to know that funding for research will be there.  “Our legislators need to understand that we have to take risks and make investments.”